Some years ago I became interested in the potential of anaglyphs to do more than just represent three dimensional space, this was a short lived interest. Among other things, I made a triptych of a friend layered so that viewed through the anaglyphic glasses he appears calm through one eye and enraged through the other. 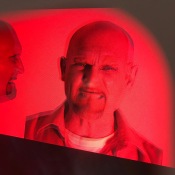 Except instead of enraged, he looks a bit constipated. This was the first and last time I worked with a ‘model.’

I didn’t really consider the portrait a success, but I did upload it to flickr, where it caused very little excitement. In ten years the image has been viewed 306 times, most recently by a Dutch graphic designer who contacted me to ask whether he could use it for a non-profit magazine that he works on. I didn’t take the time to look at the magazine, I just gave him my permission to use the image. And then I forgot about it. This kind of thing has happened a few times, there are photographs of my children illustrating quite a few travel articles. I have trouble saying no to a politely worded request, so I’m sorry to say that when it comes to devaluing photography, I have been part of the problem. Today I received a mysterious envelope from Holland containing a magazine.

What I hadn’t understood was that this image would end up being used in an article discussing man’s relationship with God in a magazine put out by Dutch Seventh Day Adventists. I’m amused because I never could have imagined that this triptych—or really anything that I’ve made—could be used to illustrate anything remotely theological. This is something that I never could have intended. And I think this illustrates my theme for the day: things in digital form are easily recontextualized. This is really beyond the control of anyone who is publishing words and images online.

In the course of looking at the magazine and the photo, I found myself using anaglyphic glasses to peer into our friend’s emotional state and using Google Translate on my iPhone to “read” the article on the printed page using the camera setting. Sometimes physical acts can “rhyme.”